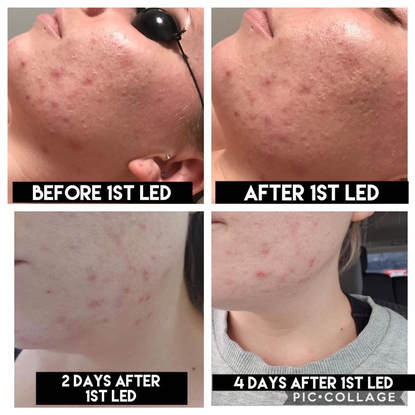 ​LED Therapy  uses light rays for various purposes (such as metabolising vitamin D for example) to re-energise and fuel up your cells so they perform and behave more optimally and efficiently. Similar to having fully charged batteries in each of your skin cells. The effects of light therapy depend on the wavelength of light used - which also determines the colour of the light:

The cells in the dermis layer of skin will convert that light energy into ATP (adenosine triphosphate), which is the fuel that the cell uses to do its job. The fibroblast cells in the dermis layer have the job of producing collagen (which give the skin fullness or that plumped look) and elastin (which give the skin the ability to bounce back).
​
Thus, LED gives the cells a 'full tank of fuel' and these fibroblast cells start to produce collagen and elastin like when one was 20-25 years old.

LED Light Therapy was first discovered by NASA scientists during experiments using cool-light sources to promote plant growth for space missions. They extended their studies to experiment on wound healing, and biologists have since found that cells exposed to near IR light from LED grow 150 to 200% faster thanks to the increased energy within the cells.

We use our device for standalone treatments, and also in conjunction with other treatments such as Microdermabrasion, Facial Peels, and Dermal Micro Needling, to speed up healing times and further enhance results.

It's important to remember that results are achieved with multiple consistent treatments. 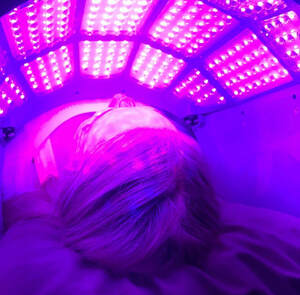 Acne Treatment:
Specific wavelengths of blue light target the strain of bacteria that is responsible for causing acne for many people (not effective for cystic acne, blackheads or whiteheads/milia). The light causes the development of oxygen radicals that kill P.acnes bacteria without damaging healthy skin. As opposed to topical treatments, LED does not have negative side-effects (such as dryness or peeling), it is also pain-free, and has no downtime.
​
Skin Rejuvenation:
Infrared therapy uses relatively long wavelengths which can penetrate the skin fairly deeply (1 - 1.5 inches) and stimulates the activity of fibroblasts, which are responsible for making the proteins collagen and elastin (which are responsible for supporting the skin and giving it elasticity). Replenishing these proteins helps smooth out wrinkles.
It’s important to remember results are achieved with consistent, multiple treatments, and should be viewed as a compliment to a good skin-care routine, including daily use of good quality sunscreen. ​